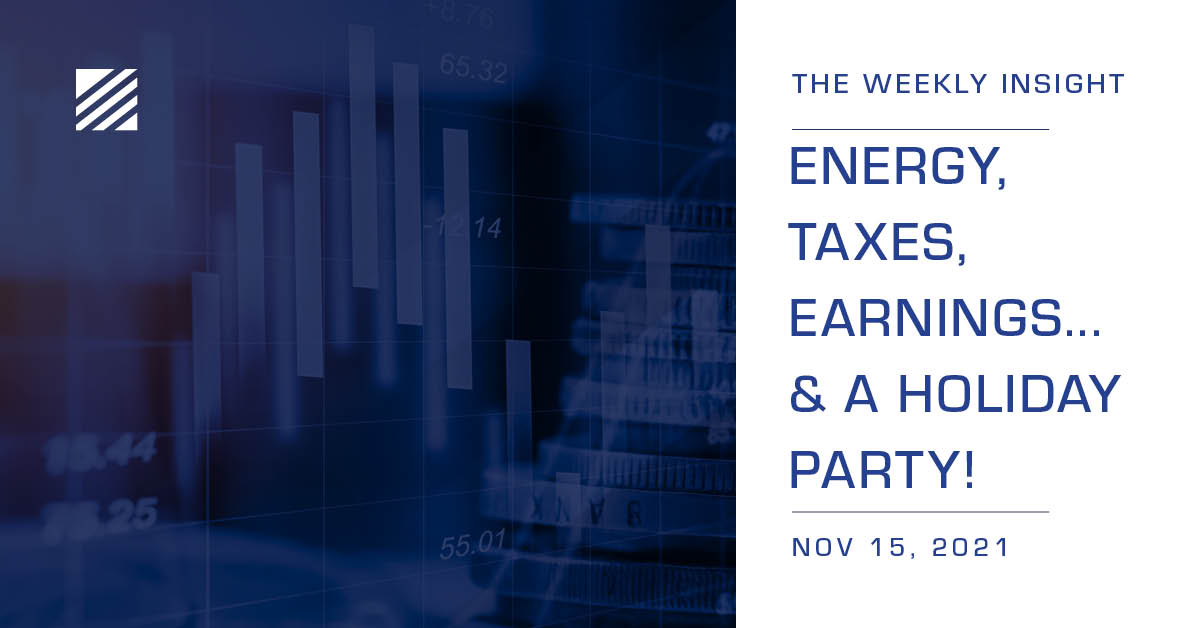 There are plenty of items to cover this week as we look back on what was a fairly quiet week in the markets. Earnings, big moves in a key energy position, and a discussion of end of year tax planning take center stage. But let’s start with the fun stuff…you’re invited to a Holiday Party!

Before we dive into the important stuff, we wanted to pass along that we are going to be hosting a Holiday Reception for our clients on Tuesday, November 30th. Simply put, we miss seeing everyone. We hope those that are able will join us for some hors d’oeuvres, cocktails, and an opportunity to catch up. We promise there won’t be any speechifying!

Invites will be coming out shortly via email and mail, but the details are below:

Many of our clients have been long-time holders of Birchcliff Energy (BIREF). It has been a long-term hold that has, if we are being honest, caused a lot of volatility in portfolios over the years. But we are finally seeing some positive action in the stock, and we wanted to provide an update on our plans with the position going forward.

First, a little background. Birchcliff is a Canadian producer of natural gas, natural gas liquids, and – to some degree – oil. As such, it has struggled in the previous few years as production of fossil fuels skyrocketed and prices slumped. COVID and shifting energy demands have changed that picture dramatically in the last 18 months.

As of Friday, the forward month contract for natural gas was sitting at $4.791/MMBtu. That is down from the peak on October 5th of $6.45/MMBtu but is up substantially from the price we saw in November of last year of $2.79/MMBtu. You can visualize that change pretty easily by looking at the spot market for natural gas (NOTE:  the big spike was during the winter storm in Texas last February).

There have been a lot of drivers to this change, but the most important has been this: production was cut dramatically during COVID (understandable) but has not recovered since. 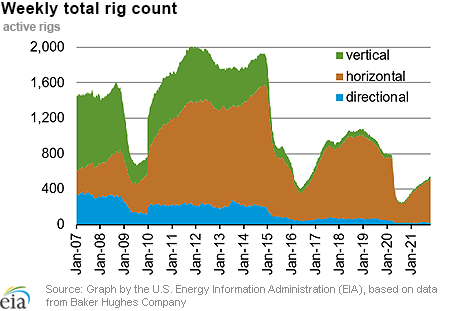 Why? Producers have changed their focus. In the old days, when prices would spike like this, producers would sprint to the fields to drill more wells to take advantage of the rising prices. Pressure from shareholders and lenders has changed that approach. Producers are now more focused on driving down debt and producing solid, repeatable cash flow. Birchcliff is a prime example of this. They have been focused on drilling just enough wells to keep production flat, while striving to pay down their debt as quickly as possible, with their stated goal in 2020 to pay down all their debt over five years.

That has changed – and quickly. Birchcliff reported earnings last week and announced that they now expect to have $345 – $350 million of free cash flow this year, up substantially from their expectations one year ago when they were projecting free cash flow of $140 million. Nearly all that free cash flow is going to pay down debt, meaning they will have paid off 42% of their debt in one year. Given current pricing they intend to pay down nearly all their remaining debt next year. A five-year plan will be executed in roughly two years.

Investors are taking notice. The position is up over 340% year-to-date as of the market close on Friday. 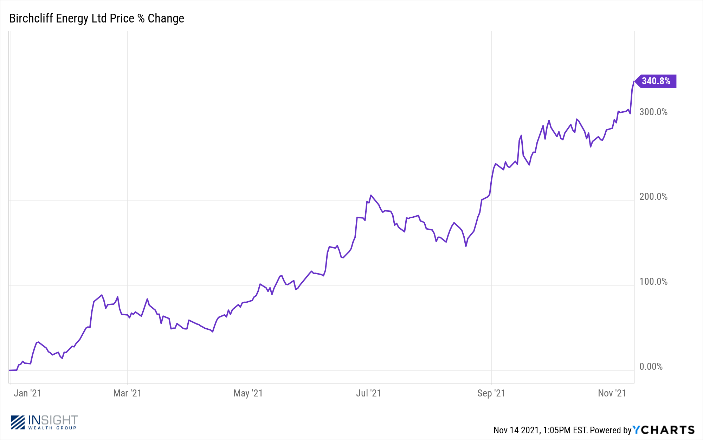 This performance has been felt in portfolios this year. But we are not sitting idly by expecting a “TO THE MOON!” moment. Investors in Birchcliff know that good years can quickly change when the market for natural gas changes. A warm winter could significantly change the trajectory for natural gas prices. As such, we have been trimming the position and have sold some shares as the position has risen in value. At the current time, for investors whose shares we are trading, we have sold roughly 33% of the position. We will continue to look for chances to reduce our risk in the position while also positioning ourselves to take advantage if the shares continue to rise.

There has been a lot of talk in recent months about the potential for a new tax bill coming out of Congress. While the promise from the Biden Administration has always been that “taxpayers making less than $400,000 will not be impacted” there has been fear amongst our client base about the impact of these new proposals.

For the last two months, we have had our team at Insight CPA on standby with a plan to host a “Tax Bill Webinar” immediately after a bill was passed. And yet here we are, with just 45 days left in the year, with extraordinarily little to talk about.

One of the biggest worries was this idea that any changes in the tax code would be “retroactive” to the beginning of the year – specifically as it relates to capital gains. We will admit the talking points out of the Biden Administration caused us some concern as well. But the simple answer at this point is this: never before has a change in capital gains taxes been implemented retroactively to impact taxable sales of securities that happened before the new legislation was passed.

So, as we get to the end of the year, it is decision time. And, in our opinion, its prudent to assume no changes will happen that will impact 2021 capital gains. We cannot speak for what will happen in 2022. Right now, we are being told capital gains tax increases will only impact those with $1,000,000 or more in annual income.

Typically, at this time of the year, we are looking to do “tax loss harvesting” in accounts to reduce our clients’ capital gains taxes in non-qualified accounts. Right now, that would seem prudent to do for 2021 in most accounts – unless you expect your 2022 income to be greater than $1,000,000. In that scenario, you may look to harvest gains at the lower capital gains rate. But if you take that approach, you are going to be making a guess as to what Congress will do. It is worth having a conversation with your advisor at Insight if you think that may be worth a look.

One final note on tax loss harvesting: it has been a rather good year in portfolios. As such, we do not have a lot of unrealized losses to take. This may be a year to expect higher levels of capital gains in accounts. Your advisor can review this data with you at your convenience.

We have not covered Q3 earnings for a few weeks and that has largely been because there has not been much to report. Earnings have been good. In fact, as hoped, they have been much better than expected. In our last earnings update we noted that the September 30th estimate was earnings would grow by 27.4% in Q3 (over last year), but our hope was that number would top 30%. Now, with 92% of S&P 500 companies reporting, we can happily announce that earnings have grown by 39.1%, beating estimates by nearly 43%. At this rate, we are on pace for earnings to grow at 40% for the entire fiscal year.

It is notable that one of the most cited concerns by companies in their earnings reports has been inflation. The data set below by FactSet shows the number of companies citing inflation in their earnings calls over the last five years. As you can see, we are at a significant five-year high. 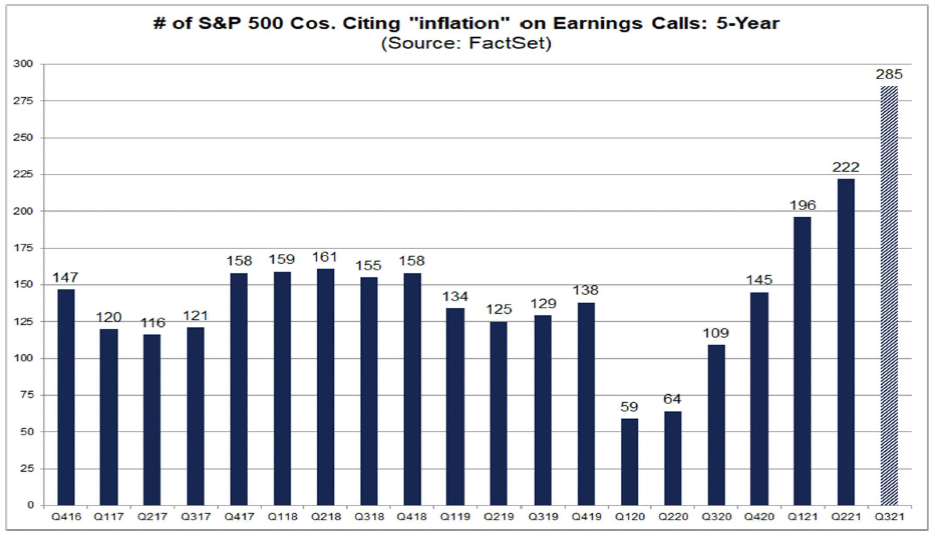 What is notable, however, as it relates to the performance of the market, is that overall expectations for net profit in Q4 have actually stayed flat since before earnings season began. They have only dropped from 11.9% to 11.8%. Most companies believe they are well positioned to profit from the inflationary risk. That, however, is a topic for its own memo (keep an eye out next week!). 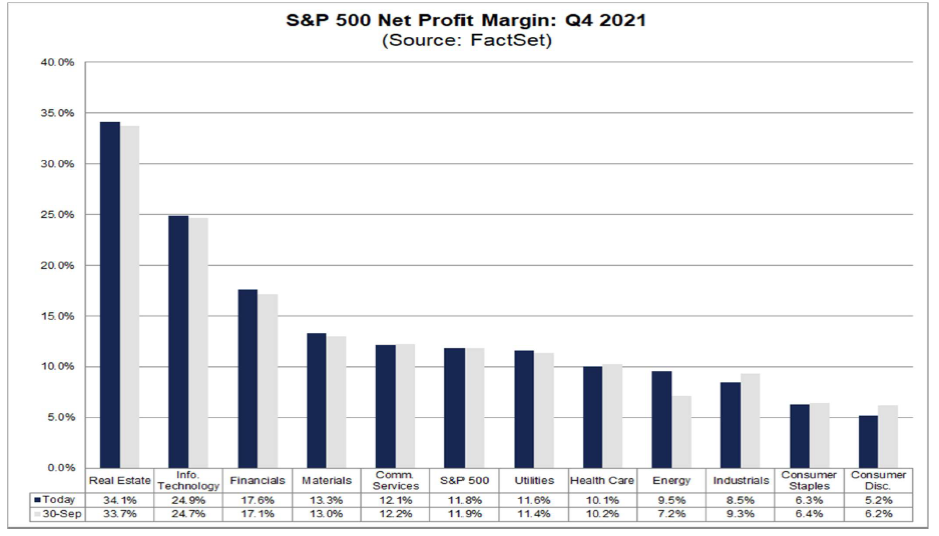 This “grab bag” has gone on a little longer than we anticipated, so we will cut it off there for now. We hope this finds you well. And we hope to see you at our Holiday Reception on November 30th!