The Weekly Insight: Did the Fed Finally Get It Right? 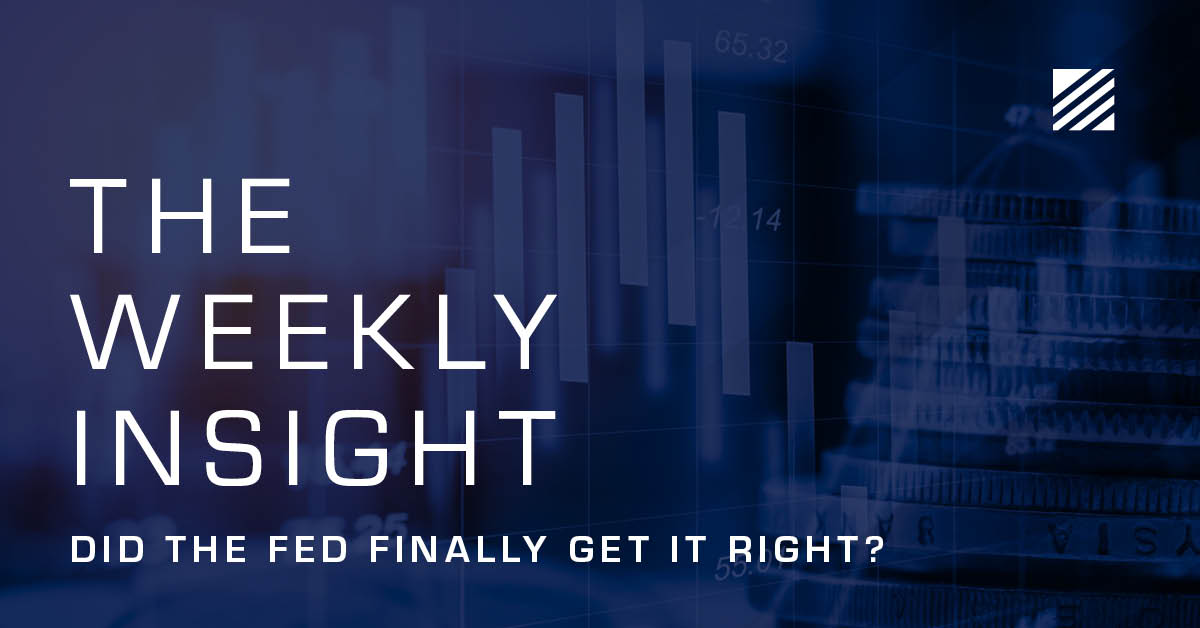 There was a text string going around amongst our team a week or so ago. The gist was basically this: Anytime things are going this well (economically, in the market, etc.), we tend to get very nervous. When is the shoe going to drop? While there was some jest to the conversation, it’s a conversation all of you want your financial advisors having. Anytime things are going well (or badly) we can’t get tied up in the emotions of the moment. We must be ready for whatever is hiding around the next corner.

And last week there was A LOT happening around the corner! Off year elections, big economic data, legislative action, and a very important Federal Reserve meeting. If you go back to the start of COVID, weeks like this one have not always left a good taste in our mouth. As a country we’ve gotten used to disappointment. But this week was different – and it showed in the market. 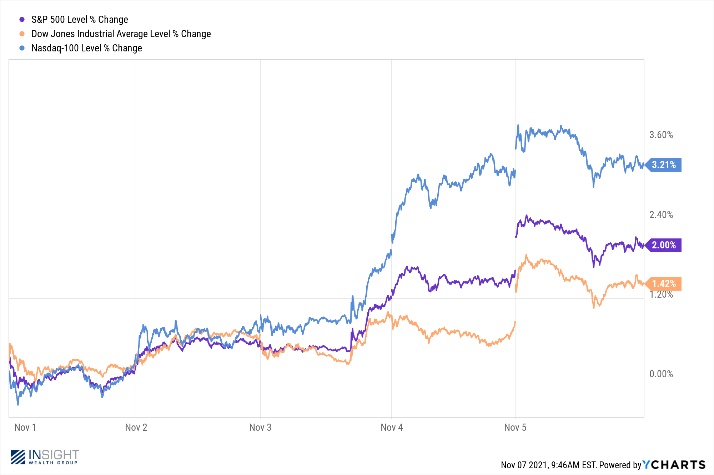 Let’s break down some of the big issues of the week and why they helped solidify the case for a growing economy.

Election Day in the off year isn’t much of a spectacle most of the time. But, as we got closer and closer to Tuesday, the media started recognizing there might be a story growing in Virginia where former governor Terry McAuliffe was running against businessman Glenn Youngkin.

Most of us don’t really care who the governor of Virginia is, do we? But we should care about the election because it has historically been an indicator of the upcoming mid-term elections in Congress. Just look at this comparison below.

Other than McAuliffe’s earlier win in 2013, you can see a clear trend. Virginia is an indicator of national opinion. When you couple that with the near loss by the Democrat governor in New Jersey, the tide is clearly shifting today.

In a world where everyone has deep seeded political opinions, we try hard not be “political” in these memos. But we do care deeply about the policy implications of elections and what they may mean for your portfolio. With that in mind, there is one axiom about government control that always rings true to us:  gridlock is good! Why? Because when neither party has full control of the government, the policies that do pass tend to be more useful. And those that are extreme tend to die. It’s good for the economy and the market loves it.

That all panned out very quickly this week.

Democrats aren’t going to just rollover on the midterms because they lost Virginia. And it seemed that this week was a wakeup call to the party: voters elected them to get things done.

And so, they quickly got to work. 72 hours after the Virginia defeat, they finally allowed passage of the (relatively) bipartisan infrastructure bill. As you are aware, progressives in their caucus had been holding up the bill for months waiting for an agreement on their “social infrastructure” bill. That opposition crumbled when they realized how unimpressed voters in swing states were.

The $550 billion bill is something that both President Trump and President Biden have pushed for over the last five years. It became a joke during the Trump Administration when he would once again announce “Infrastructure Week” yet was unable to get enough votes to move a bill forward.

There is bi-partisan agreement our hard infrastructure needs help. In fact, the American Society of Civil Engineers gave our infrastructure system a score of “C- “earlier this year. This bill aims to fix it with:

In true Washington fashion, Congress claims the bill will pay for itself. We all know that’s not true, and the Congressional Budget Office seems to agree. But lawmakers are recycling a significant amount of capital that was already promised to pandemic assistance programs that has gone unspent. Lawmakers estimate this will pay for roughly half of the $550 billion bill.

It’s amazing how quickly something like this can move when lawmakers are motivated! It will take time to see just what kind of impact this bill will have on the economy. We anticipate it will be positive – at least in the short-term. Hopefully the money can be spent wisely and be put to good work.

The Federal Reserve…Gets it Right?

The Fed announced they are beginning to taper bond purchases this week and…nothing happened. Compare that to the taper tantrum in 2013. Yes, the market was down. But Treasury yields skyrocketed. In fact, it was the fastest rise in the 10-year Treasury yield in history. 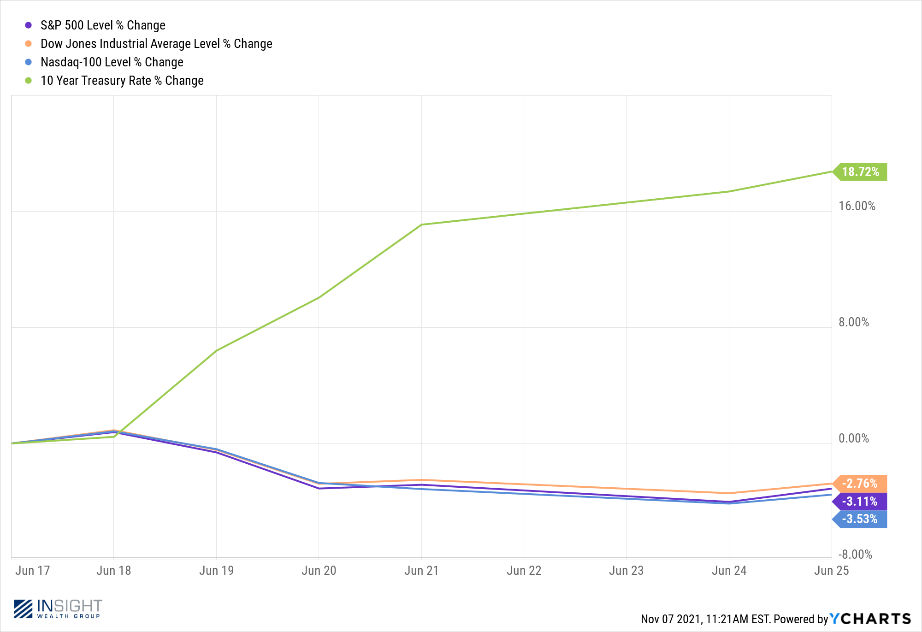 So, this week, the Fed announced essentially the same decision. We don’t yet have the benefit of time to show the true impact of the decision. But we can see the market’s instant reaction. 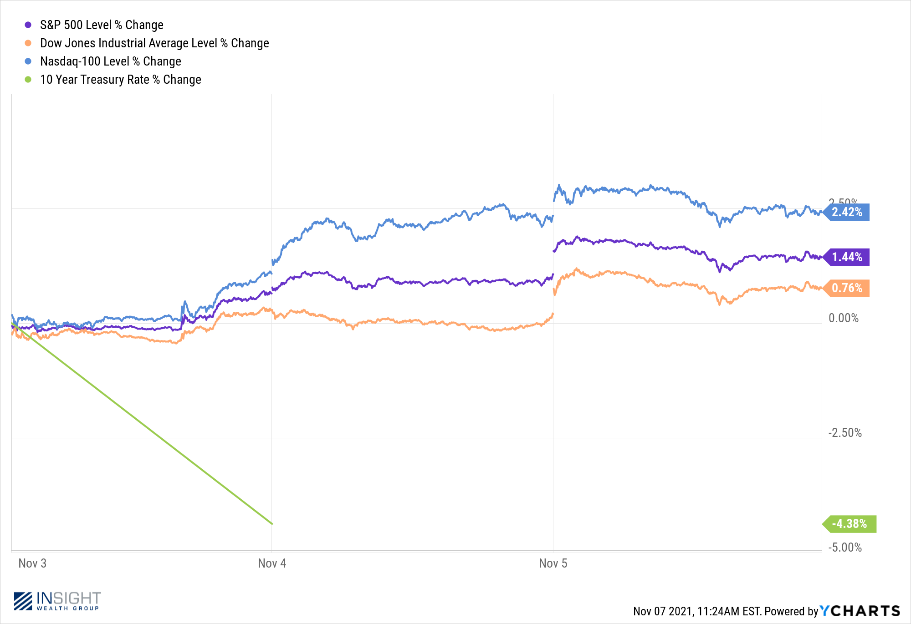 The result? The exact opposite of 2013. Treasury yields dipped and the market went up. How in the world could that happen?

It turns out the answer is simple: the Fed communicated with the public about its plans. Repeatedly they stated they intended to start tapering later this year. They indicated the rate at which they would taper. And they told the market they wouldn’t be raising rates while they tapered. So, when it happened? The market was prepared and had already priced in the decision. The Fed actually got it right this time.

Over the last two years the world has gotten so tied up in fiscal policy (money the government is spending) and monetary policy (money central banks are creating) that economic data tends to get pushed into the background. That happened again this week, but we don’t think it should have. Across the board we saw great data in the U.S. and around the world:

The economic recovery is kicking back into gear as the Delta variant wanes across the world. Throw in Pfizer and Merck’s announcement of anti-viral treatments for COVID and the future is looking better and better every day. Until the next crisis, of course.