The Weekly Insight: Back to School – The Education Funding Debate 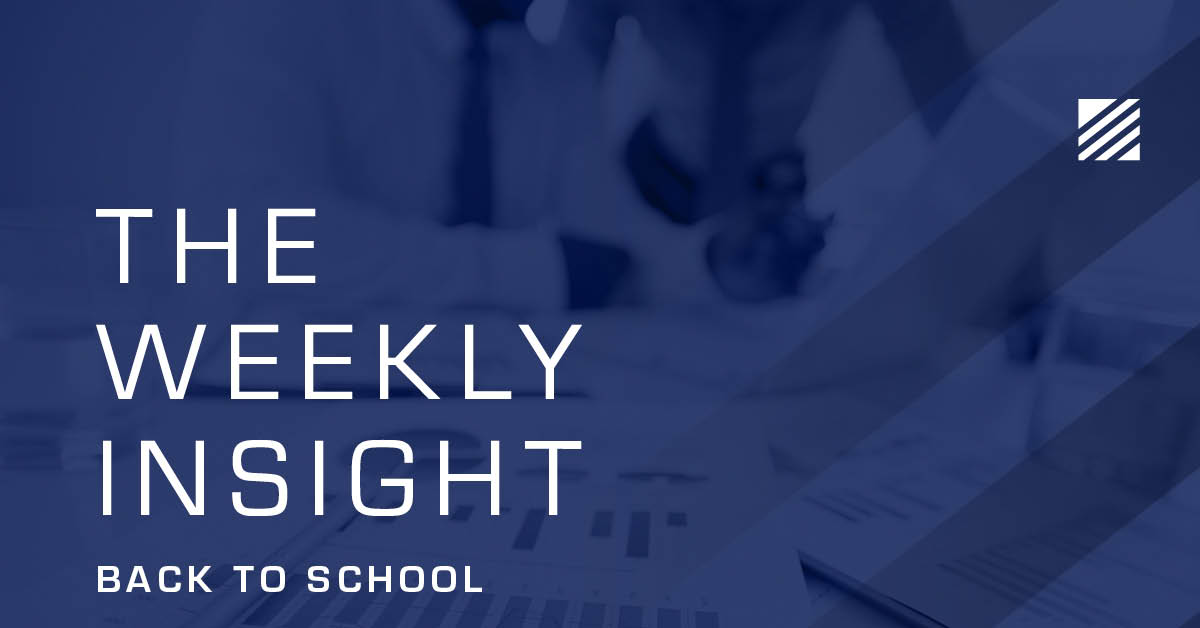 That went fast!  Yes – we’re talking about summer. But we’re also talking about the last 18 years. It’s time for school to start up again and – for those of us at Insight – a big thing happened. The oldest of the “Insight Kids” headed off to college last week. While we have no question she’s going to do great at school, we’d be lying if we didn’t say it was a little tough on those of us watching her go!

As you can imagine, with this big transition happening, a lot of conversations have been had around the office and at family dinners about planning for this transition. There are a lot of pieces to it. Academic preparation. Emotional preparation (especially for the parents!). Social preparation. But the big one for us today: financial preparation. This week, we’re going to take that discussion from our dining room table to the Weekly Insight and focus on one of the biggest financial planning priorities out there: education funding. It is an issue that will impact nearly every one of our clients. And the landscape has changed a lot since most of you reading this went to school.

We all know instinctually that education is significantly more expensive than it was when we went to school. But just how expensive?  And how expensive will it be when your child or grandchild heads to school 5 or 10 or 15 years from now?  And is there any hope on the horizon?  Before we can talk about how to save for college, it’s important to understand the savings needs – and why those numbers have grown so much recently.

Let’s start first with the facts.  They’re not pretty.  For this exercise, we’re going to look at three tuition, room, and board examples:

Here’s how it breaks down for this school year:

Your author’s alma mater – the University of Iowa – comes in as the third cheapest Big10 school, both for in-state and out-of-state residents.  Some might say that is a sign of great value (Go Hawks!).  Others (the Iowa State Fans out there) might say it’s a sign of the quality of education!  But either way, take note of this:  the cost of an in-state degree at the University of Iowa is up nearly 262% in the last 25 years.

Here’s where it gets particularly messy.  Right now, the average annual cost of tuition, room, and board (according to www.finaid.org) is rising 8% per year.  That means the cost of college doubles every nine years.  So, if you had a baby yesterday, you could expect the costs to look like this when you send them off to college in 18 years:

That’s right.  The average in-state cost for a 4-year degree would be more than $465,000.  Or more than $800,000 for an out-of-state student.  And don’t even get us started on the $1.2 million to get an Ivy League degree.  We’re sure they’re brilliant – but even the Ivy Leaguers would admit the math doesn’t pencil.  The average starting salary for an Ivy League graduate is $80,000 per year.  Even if that also grows at 8% per year, you’re still going to have a hard time paying off $1.2 million in debt.

How Did This Happen?

Before we get into the planning aspect of this issue, we’re going to take a bit of an editorial detour.  Context is important to this discussion.

Since time began, there has been bickering between generations about “who had it harder”.  Grandpa tells stories about walking up-hill both ways to school through 3 feet of snow.  Grandkids complain about costs of education and lack of good paying jobs.  Yada, yada, yada.

But, while we’re proud, cynical Gen-X’ers around here – and we tend to feel like the younger generations sure whine a lot – they are onto something.  Society has done them wrong when it comes to education.  We’ve convinced them they all need a college degree (driving demand) while providing easy to access credit (fueling supply).  This has driven prices to the moon.  But here’s the rub:  average, inflation adjusted salaries for a college graduate have barely moved in the last two decades.   In 2001, the median starting salary for a college graduate was $46,787.  In 2021, it was exactly $50,000.  Salaries were up 6.87% while tuition costs were up – even at cheap old Iowa – 262%.  Good luck making that math work.

As with many things, this all started with the best of intentions.  In the 1990’s, the federal government wanted to make it easy for kids to afford school.  As such, they made access to federal student loans a much easier process.  Now people who would never be able to go to school – or go to a higher end school – could just borrow the money to do so.  It would certainly pay off with a much higher salary in the end, right?

But markets are markets – be them financial or educational.  When the schools realized they could charge more, they did.  And it funded the ability to build bigger facilities, provide nicer amenities, etc.  Those bigger and better facilities in turn lead to more demand, which lead to more borrowing.  Rinse, wash, and repeat.  This is the housing bubble on steroids.

But here’s the problem:  if you got upside down in a home back in 2008, you could give it back to the bank, take your licks, and rebuild your life.  Not with student loans.  You cannot expunge student loan debt through bankruptcy.  There are only two ways out:  pay it off or die.  Quite the racket for the institutions.

Can This Continue Indefinitely?

As we just said, we firmly believe we’re seeing an education “bubble” right now.  And all bubbles will inevitably pop.  The question is when?  And what will it really mean?  Will prices get cheaper?  Will they stabilize?

As you’ve heard us say a million times, we love the free market.  Right now, the market for education is lopsided because of the insane amount of “easy debt” in the system.  But consumers – even those who are 18 – aren’t dumb.  At some point, schools are going to price themselves out.

And if they don’t price themselves out – demographics might play a very important role.  What college administrators understand – but most consumers don’t realize – is there is a big demographic cliff coming for college enrollment.  Why?  Americans started having less babies in 2008 due to the last big bubble – the Great Recession of 2008.  And birthrates haven’t recovered since.  Tack on the COVID crisis – which again lowered the number of babies born and colleges realize a problem is coming.

The demographic cliff we have been anticipating since the drop in births with the 2008 recession now has a younger sibling – the COVID-19 cliff is coming with another deep drop in recent births.

College students predicted to fall by more than 15% after the year 2025.

The charts tell a scary story if you’re a college administrator. 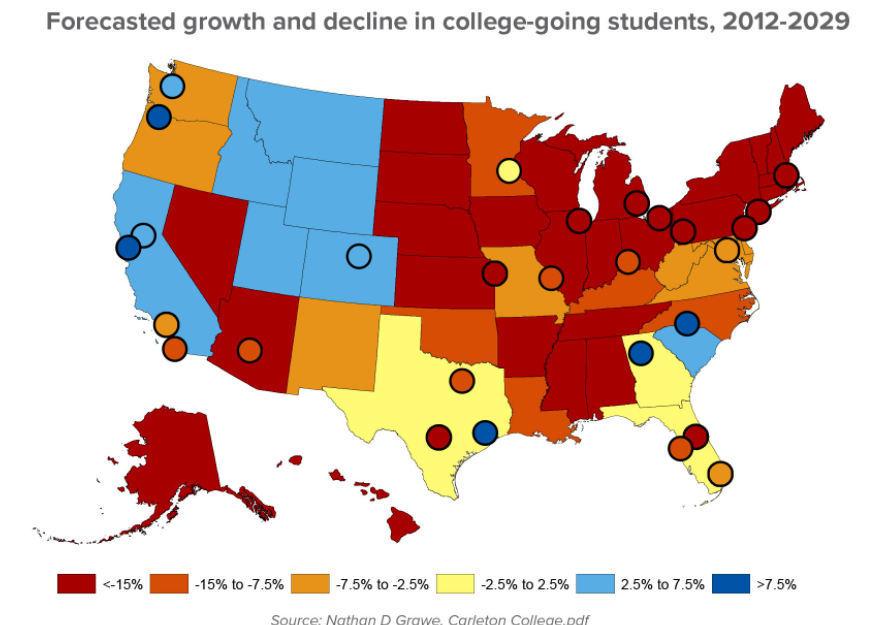 If you’re a parent or grandparent saving for a college education – this may mean help is on the way.

The other area where help for students may be coming is from the federal government.  We’ll admit, we’re not a fan of this one, but there may be too much momentum to stop it:  some level of student loan forgiveness.  It’s very hard to say how this moves forward, but it’s something to keep an eye on.

The first thing you should do if you’re considering this question today is simple:  sit down with your advisor at Insight and work through the planning process to better understand what tools are available and how they might assist.  529 plans are an important tool.  But so are Roth IRAs, UGMA and UTMA accounts, and many other saving strategies.  All are worth exploring.

But let’s be frank:  the average parent of a two-baby family today is not going to be able to save $1,000,000 or more over the next 18 years to afford to pay cash for college.  And that doesn’t even consider the fact you have no idea whether your child will even go to college 18 years from now.

One of the first things you should decide is what path your family wants to take.  There seem to be three common approaches amongst our clients:

Most clients’ primary focus should be on securing your financial position and retirement. The next focus – if you so choose – should be education.  Our children are certainly dear to us – and their education is of the utmost importance.  But there is a line we’ve used around here a lot over the years when it comes to portfolios:  Secure the Base.  That must be a priority in your life as well.  Once that plan is taken care of, then we can look to building specific strategies to move the education ball forward.  And hopefully, if your kids and grandkids are young enough, the free market will have moved this into a bit more manageable situation.