Over the last few weeks, we have discussed the four big “expectation moments” for the market as we close out the end of the year. To refresh your memory, those included:

This was PCE week, but there were two other issues that played heavily on the market: Chairman Powell’s remarks at the Brookings Institute Wednesday and the November Jobs report on Friday. They had a much more immediate impact on trading. 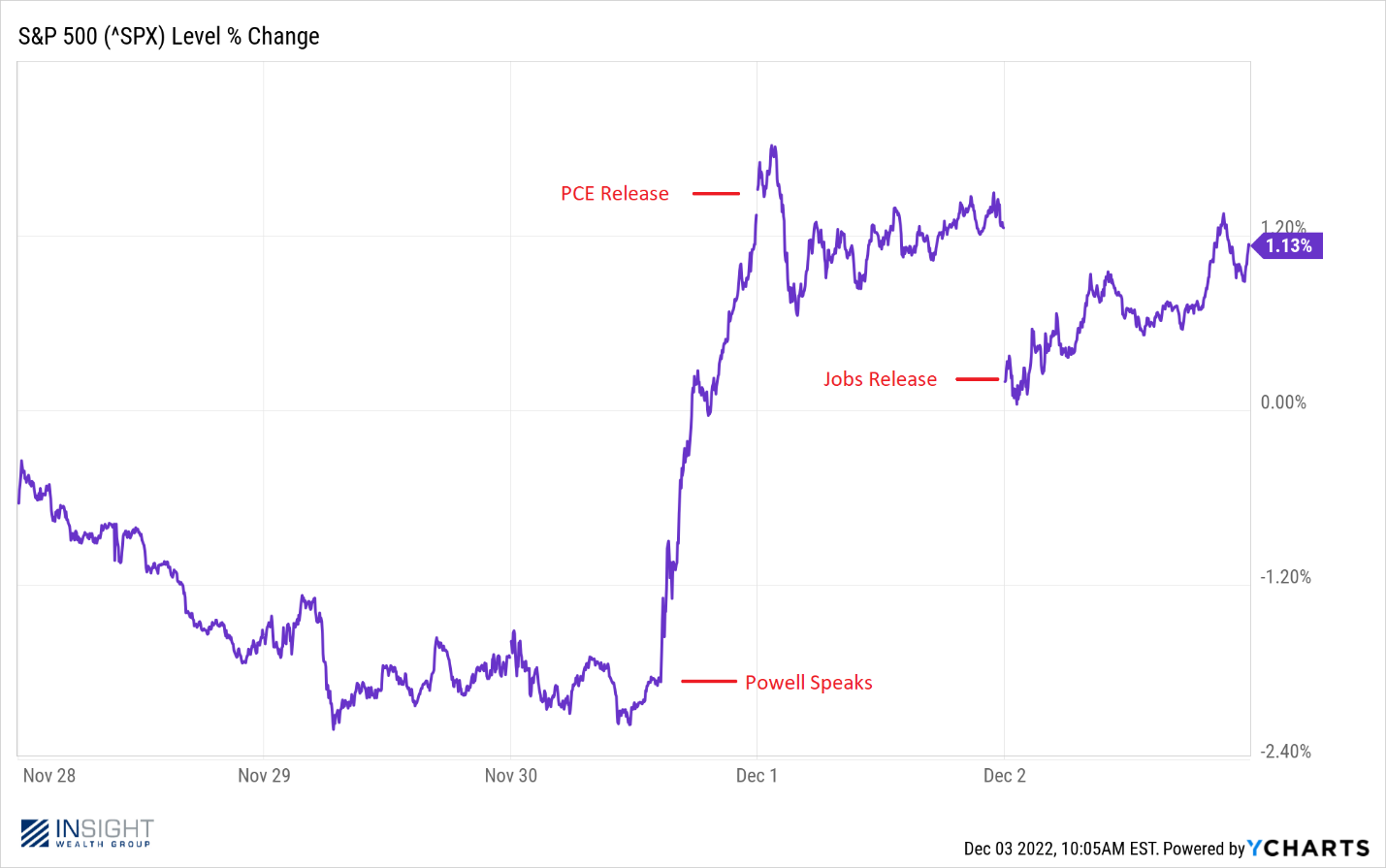 Let’s look at each of these and see what they can tell us about whether we are going to have a “happy holiday”.

A simple look at the chart above shows there was nothing more impactful than Powell’s comments last week. Why? Did he announce a cut in interest rates? Or an end to the hiking cycle?

Nope. He did not actually commit to anything. But he did hint at one big item which helped confirm the market’s expectations for the next Fed meeting:

“The time for moderating the pace of rate increases may come as soon as the December meeting”.

In simple English? We are probably going to get a 50-basis point hike out of the December meeting instead of the 75-basis point hikes we’ve been getting for the last four meetings. But while this caused the market to spike nearly 4%, it did not really change the odds for the meeting on the 14th. What had been a nearly 76% chance of a 0.50% hike is now a 78% chance. Not a substantive move. 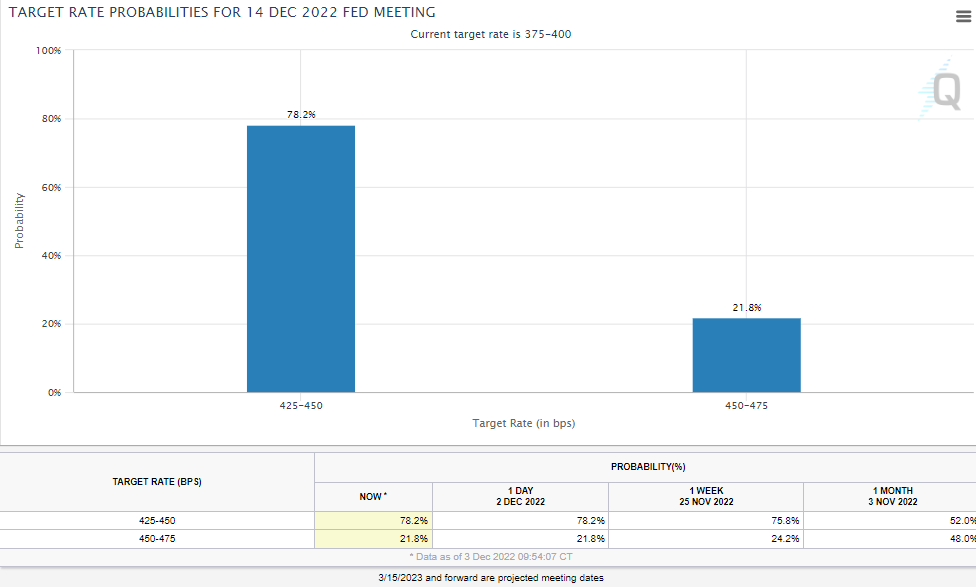 Lowering the velocity of the rate increases is a good thing. But Powell was also clear the end is not near.

“Despite some promising developments, we have a long way to go in restoring price stability”.

This brings us to the idea of “slower but higher”. We talked in these pages a few weeks ago about the “terminal rate” for the Federal Funds rate – how high will the Fed go? – and the impact that may have on markets at the end of the year. Powell is leaning into the idea that the terminal rate may bump higher at the next meeting. That is going to be an especially important item to watch.

Everything Powell talked about above hinges on what inflation does. We have seen several times this year that a bad inflation report can quickly change the direction the Fed is prepared to go. That means we are always on the edge of our seats the morning of a PCE or CPI report. 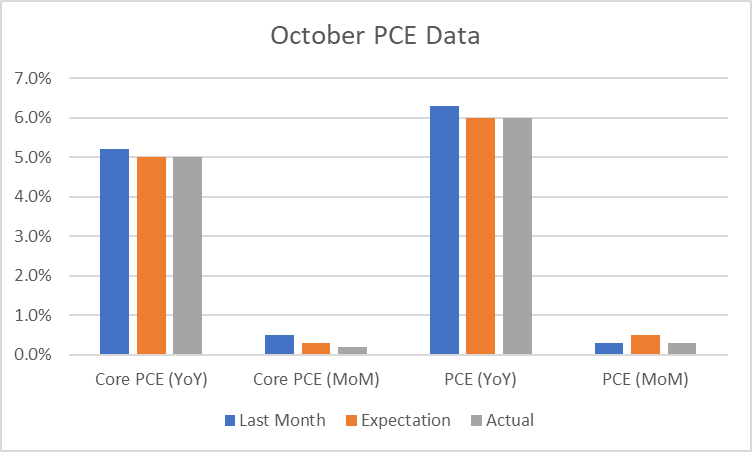 The growth of the month-over-month figures is particularly important. Core PCE and All-Items PCE came in at 0.2% and 0.3% respectively. That would indicate an annual pace of 2.4% and 3.6% annualized going forward. If it is repeated over the coming months, year-over-year inflation will continue to fall.

This one falls in the “we can’t have nice things” category. All the good news on Wednesday and Thursday was quickly drowned out with the jobs report on Friday morning which caused a bit of a panic in markets.

Why? This gets to the “good jobs bad/bad jobs good” discussion we had in these pages after the September jobs report. Right now, the market really, really wants bad jobs data. It would indicate a slowing of the economy and would be an impetus for the Fed to begin ratcheting back cuts sooner. 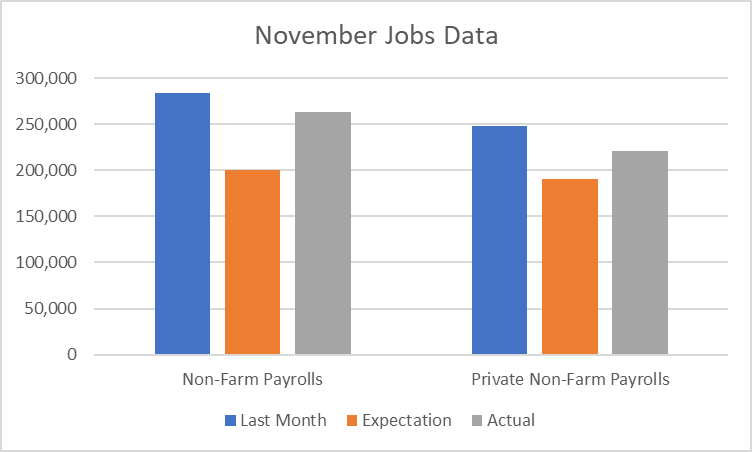 The number of jobs created dropped last month compared to October. It just did not drop as much as the world was hoping. But it was not the number of jobs that concerned the market. It was the wage data. Because we saw wage growth accelerate last month at a time the market was expecting it to contract. 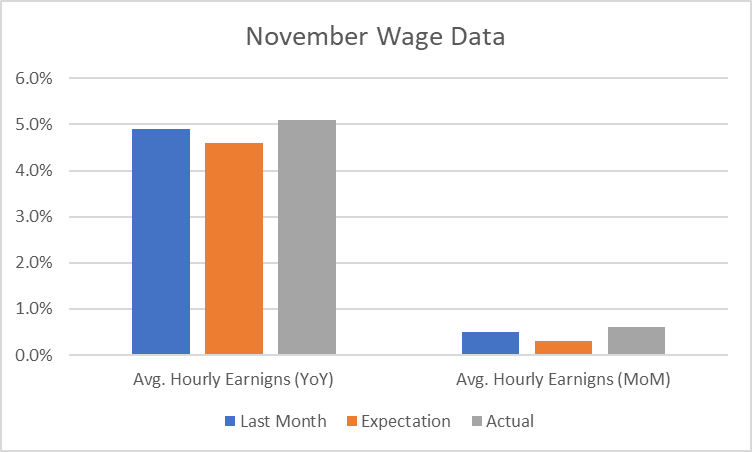 The market eventually shrugged off this data, with the S&P closing just down just a few points on Thursday and the Dow having a positive day. But it is something to watch closely as Powell made wages a priority in his comments on Wednesday:

“We want wages to go up strongly, but they’ve got to go up at a level that is consistent with 2 percent inflation over time. We’re 1.5 or 2 percent above that with current wage increases”.

Friday did not help alleviate that concern.

Long-term Insight investors know we do not try to trade around these announcements. There is no benefit to trying to predict these releases in the short-term. The downside risk far outweighs the upside.

In aggregate, these data points mean something. But trading around the individual readings or the proclamations from Chairman Powell is a recipe for disaster. Success in the markets is not about the day-to-day swings. It is about the long-term trends.

The long-term trends today? Inflation is easing. The Federal Reserve’s decisions going forward should be less restrictive. And the tail risk of the Fed’s aggressive rate increases is something we will need to watch into 2023. While we are not out of the woods, we continue to see reason to be optimistic. And this week – overall – did not’ change that.