COVID-19 Update: The Politics of Reopening 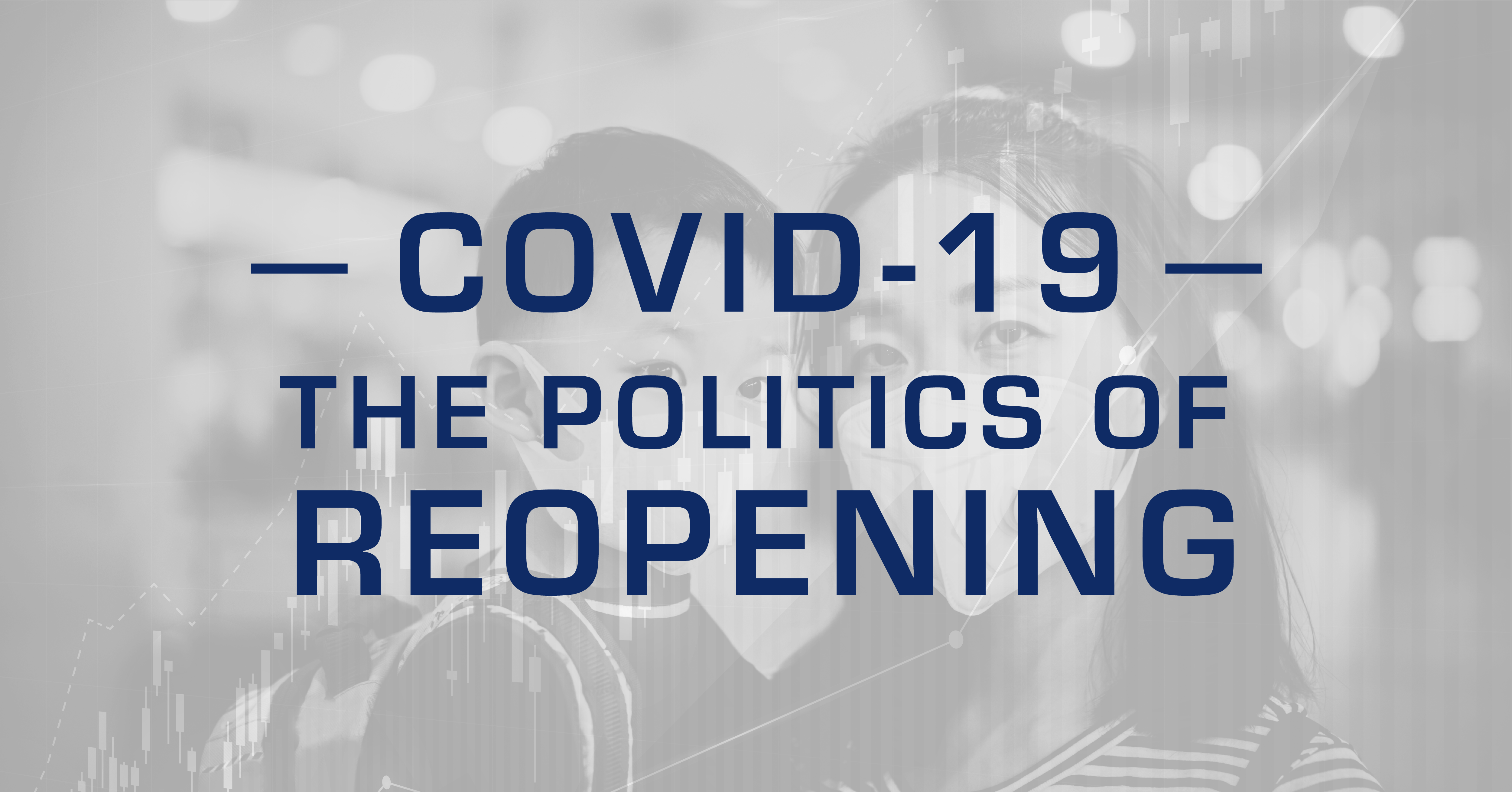 We hope this memo finds you rested and relaxed after a much-needed holiday weekend. It goes without saying this Memorial Day was a bit different – with fewer opportunities to publicly celebrate our fallen. But it is an important weekend nonetheless and one we hope you were able to enjoy (in a socially distanced way!) with your friends and family.

Despite the important meaning of the holiday, it is now back to the dirty business of getting this great country back up and running. As they say, sausage and laws are the two things you never want to see made. Nonetheless, the action in Washington and at state capitols around the nation is important as we look forward to the next steps of reopening our economy. Let’s dig into it. But first, let’s look at what is happening in the rest of the world.

Many of you have heard (good and bad) about how Sweden is handling the pandemic. They have taken a much different approach than the United States and the rest of Europe. Let’s try to break through the bluster and get to the facts of how they have handled things.

First, the timeline of COVID-19 in Sweden has been very similar to that of the United States. The first case of COVID-19 was confirmed in Sweden on January 31st in a Swedish woman who returned from Wuhan, China on January 24th. Travel related cases continued for the next month and then, on March 9th, community transmission of the virus was confirmed in the Stockholm region.

Since that time, Sweden’s actions have diverged from the rest of the world. While they have repeatedly denied claims by foreign press that the strategy was meant to create herd immunity, they have been much less aggressive about locking down the country. Instead, they have focused on the following:

Despite the complaints of many around the world, the reality is this effort is showing some success. Sweden continues to have substantially less cases on a population weighted basis than the United States and their economy showed the best quarter-over-quarter results in developed Europe. 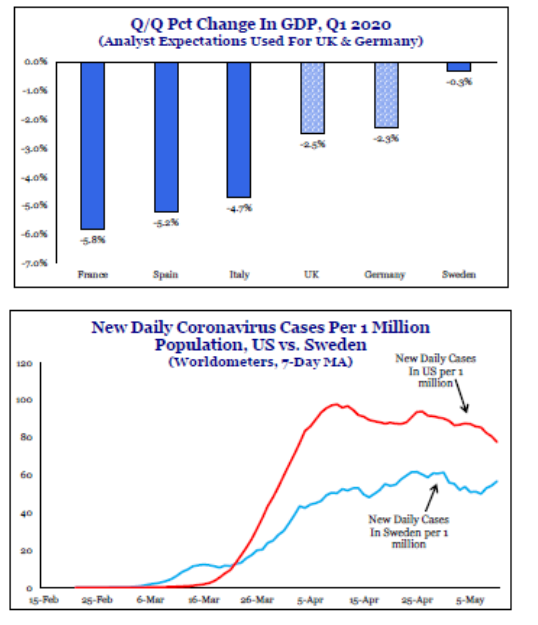 Who Cares About Sweden?

It is clear that Sweden has chosen a much different path than the United States and we are both going to have to deal with the results of our chosen direction. The question is what direction do we take next? As we have all heard, the big cloud looming over reopening is the “second wave” of COVID-19 cases we are to expect in the fall.  How will the U.S. – and the rest of the world – respond when that happens?

What we are starting to hear a lot more of today is the U.S. may take an approach much more in common with what Sweden has done than what we are doing today. Essentially, politicians are starting to realize the perils of a shuttered economy during an election year. They cannot stand the idea of shutting it down yet again right before an election.

You Cannot Shut What Isn’t Open

None of the second wave and Sweden conversations matter, however, if we cannot get this economy up and running again in the meantime. This is where politics really come into play and where – frankly – things are starting to get a bit messy.

You may recall in our last memo we discussed the bill Nancy Pelosi passed in the House a bit more than a week ago. The bill provided for over $3 trillion in additional COVID-19 support including substantial funding for state and local governments. We said at the time the bill was dead on arrival and the Senate and White House intended to construct their own bill.

Senate Majority Leader Mitch McConnell has said previously he will not support additional funding for state and local governments. Essentially, in his mind, they have taxing authority and budgetary processes of their own and they need to ante up to pay for some of these problems as well.

True or not, we have now entered a game of chicken. The message from several of the larger, more urban states, has essentially been “we’re not reopening our economy unless you give us funding”. Like it or not, this is a standoff and the economy is the hostage right now.

The funding requests are – frankly – ludicrous. For example, the estimated cost for COVID-19 response in Illinois is $20 billion.  They have requested twice that much. The same has happened in New York, California, and other states. It seems they realize they have a chip in the game and are going to get whatever they can to get things back up and running.

In the end, this is politics and a deal will be struck. As the old saying goes, you know it is a good deal when no one walks away happy. Mitch McConnell will likely have to bend and provide support for the states.  Members of his own party are already offering bills that would do just that.  And the states will likely get less than their full request. As it relates to our portfolio strategy, however, this is an important discussion to watch. We would expect to see a rapid reopening of larger and more urban states – and their very large swath of the economy – soon after a resolution is found to this standoff. If an answer comes this week, the market may react swiftly.

What to Watch for As Reopening Progresses

We have all seen the bad news on the economy. Massive jobless claims, drops in production and retail sales. The question is just how quickly that bad news becomes good news and a great deal of that depends on the psychology of the American consumer. 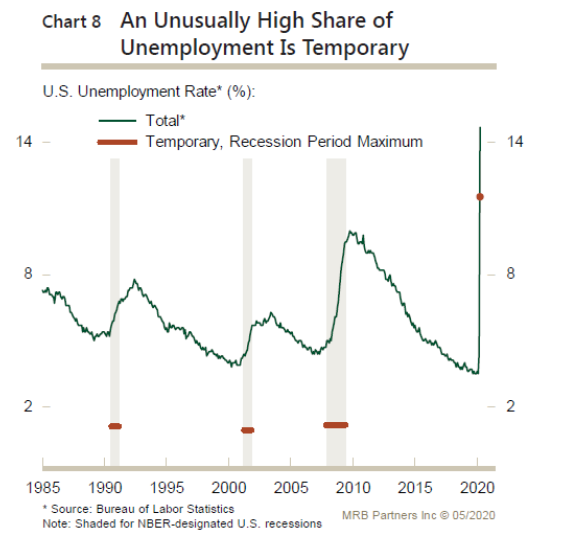 The big question is how long that remains true. The bad news in this situation is the American people are not yet convinced it is time to get out and start spending again.

But we will leave you with one final, optimistic point:  the areas of the economy most impacted by the shutdown – airlines, merchandise stores, restaurants, hotels, etc. – do not make up that much of the economy. In fact, those hit the most only account for 6.5% of GDP. So, while we certainly do not want an extended slowdown in these areas – they are also the areas we can most handle the impact of a slower restart. 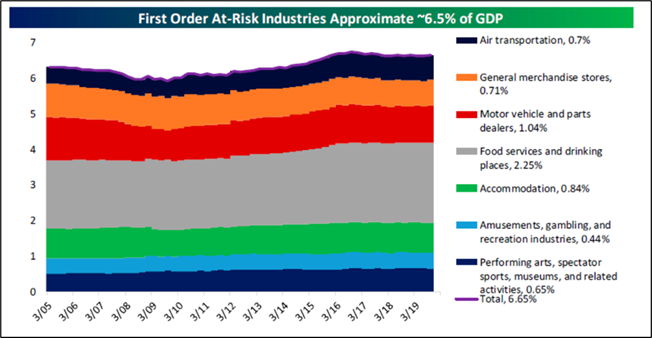 The next few weeks will be important to see how quickly and how smoothly our economy gets back up on its feet. We will, of course, be watching the battle in Washington for you and will work to make sure portfolios are appropriately aligned.