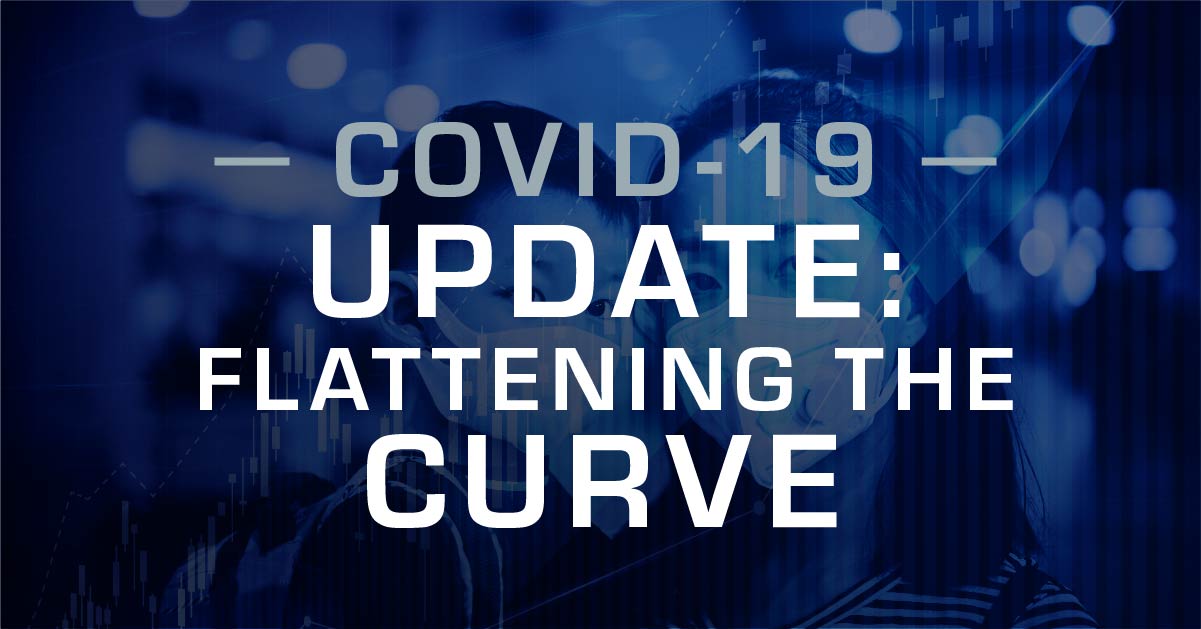 If you would have told us three weeks ago today, we would be writing a fourth memo on COVID-19, I’m not sure we can honestly say we would have believed you. At that time, while the virus was a serious issue, the bigger issue of the day was the start of the oil price war between Saudi Arabia and Russia. While the virus was a focus, its spread to the west was not yet at “panic” levels.

But, nonetheless, here we are. And this one comes after what was, by any reasonable measurement, the most dramatic week in the history of the S&P 500. On Thursday, the S&P500 was down 9.51%, one of the largest drops in history. And then, on Friday, the same market was up 9.29%, one of the largest gains in history!  We’re pretty sure that officially makes last week the shortest bear market in history lasting a grand total of one day.

But, sadly, we all know Friday wasn’t the end of this mess. The markets opened down enough to trigger the third trading halt in just over a week. The spread of the virus has now – according to the WHO – reached pandemic scale. What started as a Chinese problem is now a world problem, as you can see by the charts below. 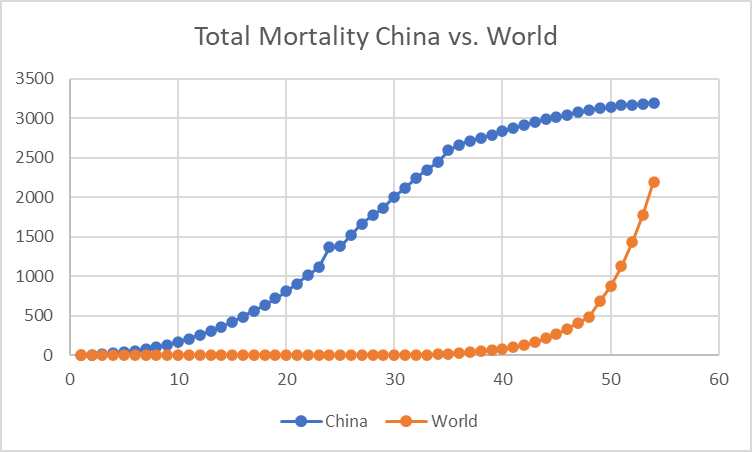 Worldwide behavior is shifting as governments struggle to come up with appropriate actions which will mitigate the spread of the virus. Here in the U.S., the goal of “flattening the curve” has become vital as we need to try to avoid a spike in cases like what happened in Italy. That is immensely important as we know our available number of hospital beds, ICU beds and ventilators would struggle to keep up with a rapid increase in cases.

Thankfully, the infection domestically is still 10 days or so behind what has happened in Italy and there is still (very limited) time to take appropriate action. It seems this weekend that action started in earnest. We couldn’t pick up our phone without reading a new alert of some sort of cancellation. Iowa schools are cancelled for four weeks, Disneyland is closing, even Ireland is shutting its pubs on St. Patrick’s Day. The message seems to have been received and enforced social distancing is now going to be the norm for a while.

We have started to see some major U.S. cities begin to take the path we saw in Italy and, most recently France, by shutting down all non-essential businesses. We don’t know how much this will spread throughout the United States and would presume it will be driven more on a state-by-state or local basis. We can’t, however, rule out a broader directive from the Federal government. This is likely the most effective measure to limit the spread of the disease, but certainly has some unknown economic impacts.

To start, as we just said, the economic impacts of this virus are yet unknown. We have struggled to find a comparable example. The best we could imagine would be a time widespread war, but that doesn’t seem to be a fair comparable.  For example, during World War II, the U.S. GDP grew at an average rate of 12.12% as the economy was ramped up to battle the Axis powers.

We know, as seen on the chart below, GDP growth during previous epidemics and pandemics has been based not on the disease itself, but on the underlying health of the global economy. 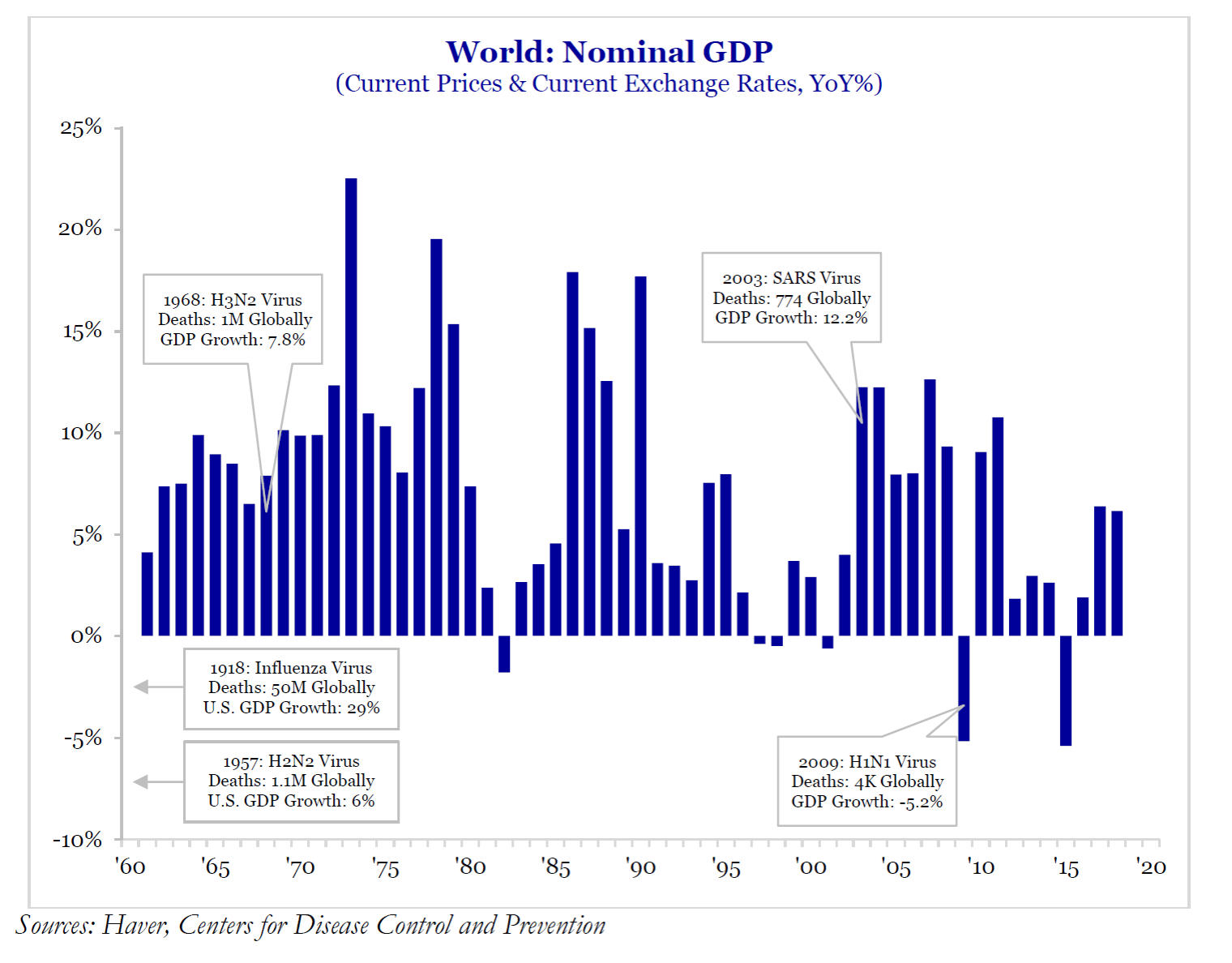 One of the comments we always hear in our line of business is “but this time it’s different”. It almost always turns out – for the good or the bad – not to be true. Markets are a price discovery tool – how much is someone willing to pay for an asset. And, right now, the fear of this situation is impacting what people are willing to pay…dramatically.

This may be one of those situations where the fear is warranted and, more importantly, where the fear will force people to take actions which can help mitigate the virus’ spread. That is a good thing. But what we can’t measure yet is how that fear will impact the economy.

Treasury Secretary Mnuchin announced on Sunday that he didn’t think this panic would move the U.S. economy into a recession. Sadly, we don’t think this is a call that can yet be made. Recessions are generally backward-looking indicators. Most times the recession has already happened (and ended!) before we even know we’re in it. Given we don’t yet know fully what the U.S. response to the virus will be, it’s hard to say we won’t have a recession. If the policy going forward mimics Italy’s, and it lasts for an extended period, it’s very possible a recession may be on the horizon. The good news is we would anticipate this to be a short-lived process as people get back to work and back to spending money.

How do we get there? China is the best example because we’ve already started to see some statistics come out of there post-epidemic spread of the disease. We know that in the month of February – the peak of the crisis in Wuhan – industrial production and consumer spending were down 20 – 25%.

If you extrapolate that number back to the United States – and assume a 3 month drop instead of just the one month shown in the Chinese data – that takes GDP projections from 2% for the year down to 1.5%. Yes – still a positive number, even after assuming a quarter of the economy essentially goes away for 3 months.

Then, when you add in the Federal Reserve’s actions over the weekend (cutting rates to ZERO), we have essentially mitigated the liquidity crisis we had in 2008/2009. We know that Fed stimulus does have a significant impact on the economy – despite the scare such a dramatic rate cut caused the market overnight and this morning.  As you can see from the chart below, additional easing has meant a difference.  It won’t be felt overnight – but it is a positive step for the economy. 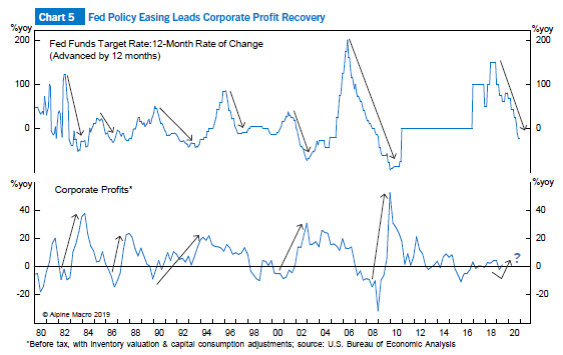 Simply put – this is not going to be fun.  But the true economic impact is one that is NOT everlasting.  And it is not catastrophic.

So, Insight, What Do We Do?

That’s the question, right?  How do we respond to this with your hard-earned retirement savings?  There are a couple of important things to focus on.

First, while this is an unprecedented time, market corrections like this are not unprecedented.  And there is one undeniable truth:  DON’T sell into the panic.  The time to run for the hills was well before anyone knew we needed to run for the hills.  The only person in history we know that got this right was Noah.  And he had a little help from the Man Above.  Sadly, we’re not getting any heavenly stock picking advice.

The second key strategy is, to use Warren Buffett’s line, “be greedy when others are fearful”.  And there is certainly reason to be greedy.  As you’ll recall when we wrote our memo two weeks ago, we were loving the valuations in the overall market.  It is even better today.  If you look at the S&P495 (the S&P500 without the FAANGs), it currently has a forward PE below 11.  That is a 40% discount to where it should be today.  That makes this the cheapest time to buy equities since Insight Wealth Group was founded in 2012.

We did take significant risk off the table last year as you’ll recall. We didn’t have a crystal ball. But the fundamentals of the market told us it was time to trim our exposure to equities.

Our crystal ball is still pretty hazy and there is no way for us to know the perfect time to buy. But we know this is a time when a balanced portfolio makes a difference. Our exposure to fixed income, structured notes and alternatives gives us tremendous flexibility and has diversified our risk away from the stock market. It has allowed us to buy throughout this episode, but the simple truth is we won’t ever find the perfect bottom to the market. Still, if we can buy assets cheaply and hold on through this process, these buys will benefit all of you over the long run.

Even today, after the buying we’ve done over the last few weeks, our core portfolios remain underweight to equities. We would anticipate continuing to use some of our dry powder throughout this week and going forward. We will not rush this process.  But we’re confident it’s the right decision to make.

Additionally, if you have excess cash sitting on the sidelines today, now would be a good time to discuss with your advisor a strategy for putting it to work.

If your email box is like ours, you’ve probably received dozens of emails from companies laying out their COVID-19 response plans. We’ll make ours simple:

Simply put, Insight will be up and running no matter what. You will have access to your accounts, and we will have the ability to trade, send, and receive funds, etc.

We know this is a trying time for everyone. We’ve been working hard to communicate during this time and ensure you know what we’re doing and why. These regular weekly communications will continue indefinitely until there is change in the nature of this situation for the positive. However, please know we are available and ready to help you in whatever way you need.