On March 30th, we sent you a memo titled “The Impacts of Social Distancing”. In that memo, we quoted the “Oracle of Omaha” Warren Buffet talking about interest rates and investing. At the time he said:

“My circle of competence doesn’t include the ability to predict interest rates a day from now, or a year from now, or five years from now.  Can I function without knowing that?  It’s the same way as predicting what a business is going to do, what the stock market’s going to do.  I can’t do any of those things.  But that doesn’t mean I can’t do well investing over time.”

We bring this quote up again because this is arguably the best investor of his generation saying it is impossible to predict the day-to-day machinations of the stock market. There has been no better time than the last few weeks to prove that statement true.

Economic Expectations vs. the Market

It is interesting going back and rereading that memo now because we talk in great deal about all the things we did not know at the time. We didn’t know what was going to happen with unemployment (this was written right before the first big 3 million jobs lost report), we didn’t yet know what the CARES Act would entail (nearly $3 trillion in fiscal support), or what earnings for Q1 were going to look like.

Today, we can start to fill in the sketch. Over 23.5 million unemployment claims have been made since that memo was written. Earnings for Q1 have declined 13.6% year-over-year. Congress has acted (twice so far… more to come). And just last Friday we received a very negative retail sales report.

So, imagine we gave you all that information blindly, without explanation, and asked you what you believed the performance of the stock market would be over the next 45 days. We are not trying to be smug here, but we doubt anyone would logically say the market would be up nearly 11% over that time. But that is where we find ourselves today.

We mentioned in another memo several weeks ago that the market is a price discovery tool – how much is someone willing to pay for a certain asset with a certain amount of assumed risk. What is important to remember right now is the market is starting to understand the risk – and the downside – of our current social distancing regime. It has a lot of data to work from.  And it is saying resoundingly: this is a fair price.

To be clear, there seems to be a ceiling to the market’s willingness to bear additional risk. While the market is up substantially from March 31st – it has traded in a 100-point range since the end of April. The bad news is not knocking it off this plateau – but any good news isn’t helping us climb to another level either. There seems to be significant resistance above the 2930 level on the S&P and below the 2830 level. We will be watching closely to see if the market breaks either of these bounds and if it may lead to an extended trend.

We are now at the point that 90% of S&P500 companies have reported Q1 earnings. It’s fair to say this gives us strong insight into how the month of March impacted companies. But as you all know, very few companies are providing earnings guidance for Q2 (because much like all of us — they’re not yet sure what to expect), so we are entering a period of little corporate data until early July.

One of the reasons the market has held up, in our opinion, is that – despite dismal earnings – earnings reported have exceeded the analysts expectations by 2.1% and we have seen more “positive” surprises than “negative” surprises (even if those positive surprises were still bad numbers). 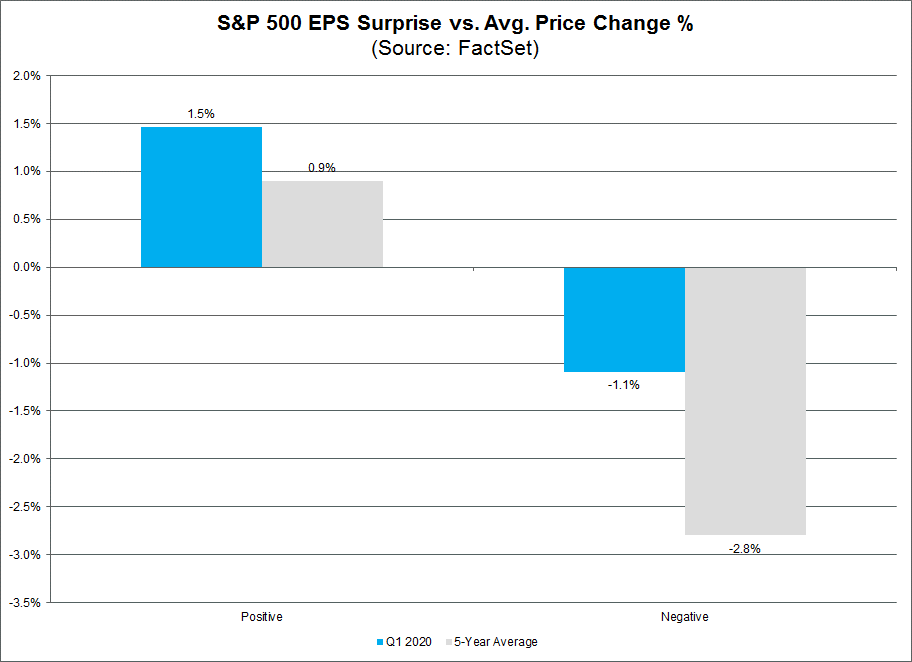 The bigger surprise is that companies who did have a “negative” surprise fared well in the market. For example, Facebook reported earnings per share of $1.71 for the quarter vs. $1.74 expected. Yet their stock price increased 7.9% over the next week.

Earnings per share estimates for Q2 are down dramatically (-29.2%). In a strange way, that may end up being a very good thing. If earnings end up down just 20% (a huge decline), that is somehow going to end up being good news. Shocking to believe – but it may end up driving the market higher in the later half of the summer. It is definitely something to keep an eye on.

We’re from the Government…And We’re Here to Help

Ronald Reagan once said those were the “nine most terrifying words in the English language”. That may end up being true when all the government stimulus money is out the door and it comes time to pay the piper. Today? We are not there yet.  We have talked frequently over the last few weeks in these memos about getting the country back to work. It has become clear that will not be an easy – or quick – process.

Federal Reserve Chairman Powell unveiled a scary statistic this week: 40% of households making less than $40,000 per year have filed for unemployment since this lockdown started. Republican or Democrat, fiscal conservative or fiscal liberal, I think we can all agree these are the very people we need to support in such an economically frightening time.

I think we all have a sense – right or wrong – of generally believing the Government is not the most efficient tool for environments like this. It seems Congress agrees as they – and the White House – have essentially determined the solution is to drown the problem with cash and hope it gets to the people that need it most. Frankly, while we may not like it (especially when we consider how its going to get repaid — see increased taxes), it is probably the only solution government is capable of in a time efficient manner.

The next round of COVID support bills is currently up for debate in Congress. On Friday, the House of Representatives passed a $3 trillion tax cut and spending bill which would provide substantial directed payments to citizens and state and local governments. The bill included $1 trillion for state and local governments, up to $6,000 per family in additional direct payments, an extension of federal unemployment benefits, and $200 billion for hazard pay for essential workers amongst other items.

Now the Washington machine begins to spin. The Senate and the White House have stated that they intend to dismiss the bill out of hand and come up with their own legislation. In the end, it seems both sides agree more must be done, but the battle will continue on how, how much, and who gets the credit. Hopefully by the time of our next memo we will have more detailed information to provide.

Next Steps for Insight Wealth Group and Insight CPA

We mentioned in our memo last week that we are working to move our offices to a reopening. The process has been interesting, because while we certainly want to see our team and each of you, we have also learned that we can effectively operate on your behalf in a distanced manner. So, while we hate the current circumstances, we are heartened by how our team – and our client base – has responded.

We are having conversations as a management team – like thousands of others happening across the country right now – about issues we never thought we would have to address as a wealth management and accounting firm. How will we disinfect workstations? What happens if a staff member tests positive? Etc., etc., etc.

But the good news is we are having these conversations. We now are certain about what we hoped was true in March: we can execute whether we are sitting in the office or in quarantine. Our job now is to ensure we offer our staff and you the safest environment upon a return to “normal”.

It remains our plan to welcome the staff back to the office on June 1st. We also intend to provide further direction on when we will open our office to you very soon. In the meantime, all client appointments will continue via phone or video conference. It goes without saying that these plans remain very fluid, but we are hopeful we can see each of you soon.

As you probably know by now, we tend to take our job – and the responsibilities you entrust to us – very seriously. That certainly has not changed. But this whole process of national lockdown has also been a stark reminder to us of the things that really matter in life. While there is so much fear in the world, it’s also meant slowing down, spending time with family, and reconnecting with those you love. In a strange way, you could argue it has been good for our nation to take a pause.

As Memorial Day approaches next Monday, its purpose is an excellent reminder to each of us of what really matters. Since we are quoting Ronald Reagan today, his remarks from his 1984 D-Day speech in Normandy are particularly compelling:

“Why?  Why did you do it?  What impelled you to put aside the instinct for self-preservation and risk your lives…What inspired all the men of the armies that met here?  We look at you, and somehow, we know the answer.  It was faith and belief; it was loyalty and love.”

Normally, long holiday weekends like the upcoming Memorial Day weekend are an opportunity to reconnect with family.  This year it will probably look different. But we hope you’re able to take some time over the weekend to reflect and remember the millions of men and women who have dedicated their lives to protecting us and earning for us the freedoms we so dearly hold tight.

To each of the veterans who have fought and sacrificed for our country – we say THANK YOU!  And for those in public service fighting on the front lines to protect this country today – be it in the military, in hospitals, or the myriad other services keeping this country standing – we are grateful for your service.